Modes of Transport in Cameroon

Transport is cheap in Cameroon, and you get what you pay for!

There are various modes of transport in Douala, all with their pros and cons, but on balance - more cons.

Taxi – In Douala there is a sort of public transit system based on shared taxis. A taxi will slow down or honk while passing people standing at the side of the street and based on the destination and price you call out, will decide whether to pick you up or not. Five people cram in with the worst situation being sharing the passenger seat with a large sweaty stranger. It is a fairly intimate arrangement and it is customary and polite to say hello to your fellow passengers. The cabs are mostly dilapidated old Toyotas with lots of dents and dings from the frequent fender benders that occur in the crazy traffic. Cab rides within the same neighbourhood are 100 CFA or about 20 cents, with longer rides being double or triple depending on distance and time of day. If for reasons of safety or comfort you want a cab to yourself you can pay 2000 francs or about $4 and the taximan will take you to your door.

The highest number of people I have personally experienced was either 7 or 8 passengers plus the driver in a 5 passenger vehicle. I am not sure of the total because I was sitting in the front and could not turn my head. The driver was reaching between the legs of the woman to my left to shift gears.

Moto - Motos are slightly more comfortable in my opinion and much faster as they weave through traffic when there are embouteillages (traffic jams). They are just a bit more expensive than taxis if you haggle a little but one also has to calculate the risk involved. Motos will get creative and take to the sidewalk, boulevard or lane of oncoming traffic to make progress. Motos are used to transport a wide variety of loads such as a family of five, fifteen foot long lumber or a full sized couch. And I don’t mean the ‘tractor’ motos pictured below, but a regular motorcycle.

Bus - Buses between local towns are reasonably comfortable and $3-7, though the last one I was in had no air conditioning and only two small operable windows in the roof. When we were stuck in traffic for an hour it turned into a sauna on wheels. Everyone was in surprisingly good spirits despite the extreme sweatiness of the situation.

Vehicles here inevitably tombent en panne (break down) but people are very resourceful. When the moto I was on in the middle of a huge palm plantation broke down the driver removed the spark plug, adjusted the gap by banging it with a wrench and we continued … though we repeated this process several times. A shared van was a less successful repair though the vehicle in question was in sadder shape with the gas tank having been replaced by a jug under the hood, and a fuel hose wrapped in old inner tubes to stop the leaks.

Some days the traffic seems a bit like a dance the way the vehicles weave in and out, but other days it just seems like a terrible noisy congested mess. I think I must be getting used to it because yesterday I ate my lunch while travelling by moto.

For all who are travelling by any mode of transport - be safe and bon voyage! 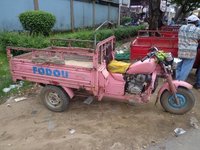 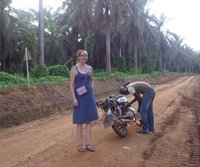 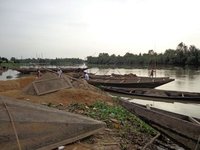 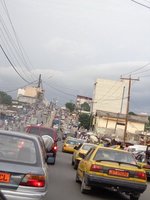 Posted by LizDykman 03:31 Archived in Cameroon

Previous Next Table of contents

Amazing Liz! I want to travel by one of those boats. I'd be happy to travel by canoe, but the lakes are still frozen here. Hitting double digits today though, so not for long.
Thanks for the update, hope you are well, and great photos!

This blog requires you to be a logged in member of Travellerspoint to place comments.

If you aren't a member of Travellerspoint yet, you can join for free.