Everybody's working for the weekend

I have two adventures to report on since my last post. I had the opportunity to travel outside of Douala the last two weekends, and it has done me good to get out of the dirty, noisy city. It is hard to come back to the city after a weekend in the beautiful parts of Cameroon.

Last weekend I went to Kribi with the other volunteers and Marc, the fiancé of Maman’s sister. The trip there went splendidly. Kribi is beautiful, the beaches are clean, and we stayed at a really great place with individual cabins and a pool. Check it out at http://www.kribiholidays.com/2.html. The water was remarkably warm and we had a great time playing in the waves. The downside was that on our return to Douala the bus blew a tire and had some other mechanical problems so we had to wait all after noon for the next bus. I forgot my camera on the bus when we finally decided that it wasn’t going to get fixed, and when I looked for it some 20 minutes later, it was gone. So I’ve purchased another camera that isn’t nearly as good and someone in Cameroon has a pretty kickass waterproof camera. Luckily I had handed my memory card over to Marc before this happened, and didn’t lose my photos. 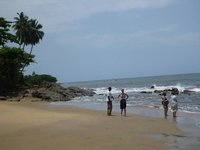 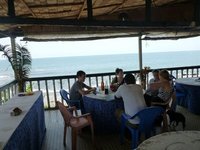 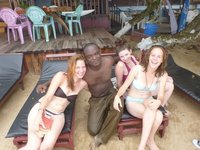 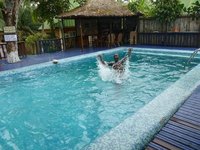 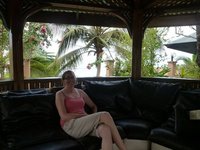 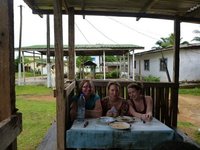 Because the organization with which I am volunteering does not have an office of its own at the moment, Abby from Alabama and I are working out of the offices of a solar energy company. Daniel, the head of the company, invited us to visit the western part of the country to see the countryside, visit some of their projects, and see his village. Western Cameroon has plantations of palm, bananas and pineapples, and is also the swanky part of the country. The richest Cameroonians build huge mansions on the hillsides in this region of refreshingly cool climate (by Cameroonian standards) and beautiful views. It’s a bit like cottage country because business men spend the weekend there to escape from Douala.

On the way out west we suffered a bit of a delay with a blown radiator. This necessitated a change of plans since we weren’t going to make it to Daniel’s village by nightfall and travelling in the dark is dangerous because of the condition of the roads and crazy drivers. So we spent the night in Dschang at Daniel’s brother’s parents-in-law and the next morning visited an artisanal workshop/market and the cultural museum there. We continued on to Baffousam and Bana with various stops. We visited two waterfalls, the site of a women’s school that is being constructed by an American woman, and met a guy from Italy who is leading a project to install solar panels to provide electricity and water pumps to some schools and hospitals in the region.

Learning about the solar energy projects was fascinating, the countryside was incredibly beautiful, and the roadside fruit was truly amazing. I will definitely be making plans to get out of Douala again soon! 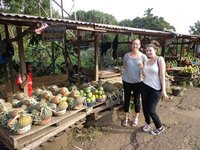 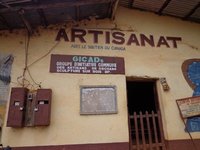 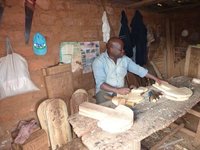 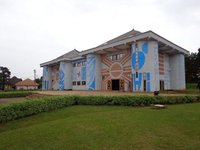 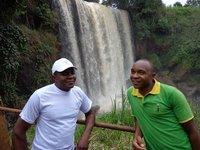 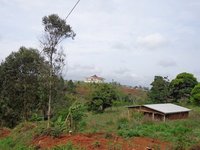 Hello all and apologies for the tardiness of this post! The subject of this post is communication in Cameroon, by way of explanation/excuse. Though the other volunteers and I have spent a considerable sum on a wireless router and internet credits, the service is slow and expensive. Some days it seems like a true victory if I can download a word document.

One problem is that CamTel, the national communications company has a monopoly in terms of fiber optics. It is quite unfortunate since better internet service would surely facilitate development in numerous areas of the economy. At Youth Business Cameroon we have discussed the potential opportunities for local artisans to sell their products abroad using internet services like Etsy. Apart from the internet service, another difficulty is that the postal service is also terribly slow, and apparently packages are sometimes opened or stolen. Mail between Cameroon and North America can take months.

Mobile calls are frequently dropped and credits for air time are expensive as well. Mobile conversations have the added challenges caused by traffic noise and my French difficulties. There are frequent misunderstandings.

Here are some photos of those artisanal products I mentioned. A local designer of clothing and accessories made from natural materials put on a fashion show for us. She gave us the fantastic hats made of leaves. 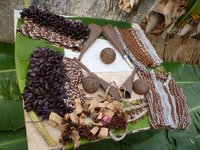 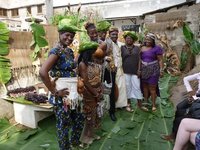 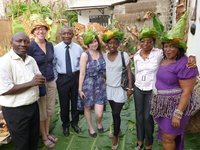 In my last post I told you that I am living at an orphanage. While I have had a few less than stellar moments during which my patience has not been up for the challenge, for the most part the children are lots of fun. Though my volunteer work is not here at the orphanage I do spend most of my time here since I also take my French lessons in the house and do my volunteer work from home since the NGO with which I work doesn’t have an office. More on the volunteer work in a future post. 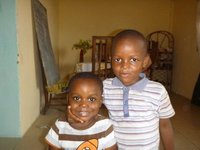 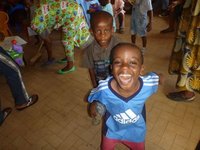 Maman Simone is the formidable matriarch of the orphanage. She takes a very keen interest in the safety and security of the volunteers, and considers us all her daughters. For the record she is only 5 years older than I. There are about twenty orphans and also Maman’s children (3). There is rarely a dull moment, lots of noise, and any desire for privacy must be abandoned.

Last weekend Sonja, one of the other volunteers, organized an outing for the children to an amusement park. I don’t think any North American parents would have allowed their children on the rides given their rather dilapidated appearance, but we had a lot of fun on the bumper cars and la manège (merry-go-round). I hope the children had as much fun as I did. A few days ago we all went to the park to play footbol (soccer) with one of the new balls I brought for the kids. We were they envy of some older guys who may have appropriated the ball for themselves if the kids hadn’t been accompanied. The photo of the footbol match shows me to the left of the frame. I would like to assure you that I was more appropriately attired before Mama Simone insisted I wear something sexier. I could not look anyone in the eye on the way to the park dressed as I was in shiny purple spandex pants, but I did it to make Maman happy. 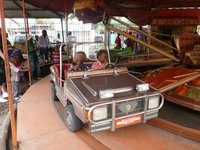 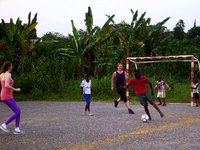 The purple pants did not honestly make much of a difference since I stick out from the crowd as it is. Walking down the street people definitely take an interest in my presence, in the market there is a constant refrain of La Blanche, La Blanche (White), and Sonja has received numerous marriage proposals.

I have also made some good friends. Jean François is the oldest son of Maman and he has taken us out dancing with his friends, and Landry, another friend of the family, has vowed to make it his mission to make sure my French improves during my time here. Everyone is very friendly and kind. The other two volunteers living here are great and I am really enjoying myself.

Love to all back home!
Liz 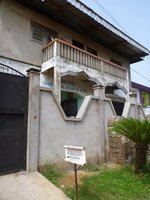 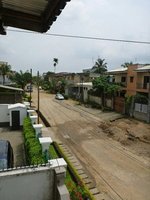 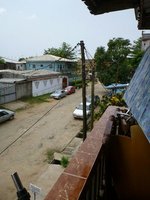 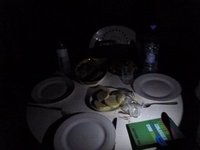 I arrived in Cameroon safely six days ago, flying from Toronto through Paris. After 17 hours of travelling, I wasn't exactly fresh, and I don't think I've been "fresh" for more than five minutes since. Toronto was rather cool so I was wearing tights under my pants for warmth when I left. When I got off the plane in Douala it was the expected 30+ degrees and 90% humidity but I could not find a toilet to change.

My local "fixer" Akobe Akomian who works with the www.thehumanityexchange.org was at the airport to pick me up, holding a sign with my name. I've always wanted someone to meet me at the airport like this as it makes one feel like some sort of celebrity.

Akobe and a driver, Guy, took me through Douala from the airport to the neighbourhood where I will be living for the next three months. All the things I had been told to expect were confirmed. The roads are bad, the traffic is crazy, and it is HOT. The traffic consists of many large trucks and passenger vehicles in various states of repair, hundreds of motorcycles with or without headlights (but definitely no helmets), and no traffic signals or road markings. There are no street signs and most of the roads aren't on any map. The most aggressive drivers get ahead and it isn't for the faint of heart. I wouldn't call it a pedestrian-friendly environment. Somehow most get where they are going, though I understand there are frequent accidents.

I arrived at the orphanage which is housing some volunteers in spare rooms. It was totally dark, as the neighbourhood was in the midst of one of the rolling blackouts that occur almost every evening. See photo of dinner by flashlight above.

I was greeted by many friendly children who never think it is too hot to hug. Despite the fact that I was still wearing those damn long johns I appreciated the warm welcome. Everyone has been very patient with my less than perfect French and many requests to "Repetez s'il vous plait".

There is much more to tell, but that is all for now.

Pitstop in the Big Smoke

Here is the cake my good friend Tim bought to celebrate my pending departure. It was delicious, and featured a rather impressive if not totally geographically accurate map of Africa. 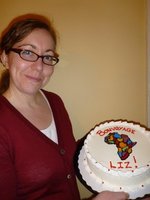 After the first slight hiccup (a two hour delay in the Winnipeg airport), I made it to my first destination - Toronto. Not terribly exotic, but friends and family to see here on the way. Here in Toronto I have been staying with my sister Kate and her partner Alex, who have been lovely gracious hosts. Friday evening I met up with a friend from Kitchener-Waterloo with whom I have kept in touch since my time at U of Waterloo. Saturday Kate, Alex and I stopped by Lawrence Market for lunch and then did errands about town. In the evening we went skating at the Harbourfront. The photo below shows the CN tower in the background if it is not totally clear. Sunday I had brunch with another former Winnipegger and am now making sure the bags are packed up again for the big departure. 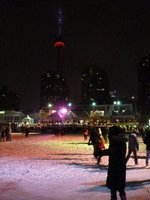 The fact that I am really on my way started to sink in on the flight from Winnipeg to Toronto and I got rather excited, to the point that I was getting teary-eyed. I don't think I've ever cried with excitement before. Perhaps I will be crying again after a transatlantic flight to Paris followed immediately by a 6 hour flight from Paris to Cameroon? International travel is of course a luxury that a small proportion of the world's population get to enjoy, so I will just buck up and count my blessings.